A few weeks ago, when the novel coronavirus was just starting to spread in the Western world – and along with it, many people’s fears – I became aware of an essay by C. S. Lewis: “On Living in an Atomic Age.” The entire essay can be found in Lewis’s collection “Present Concerns: Journalistic Essays,” but the following excerpt has been most circulated:

In other words, do not let us begin by exaggerating the novelty of our situation. Believe me, dear sir or madam, you and all whom you love were already sentenced to death before the atomic bomb was invented: and quite a high percentage of us were going to die in unpleasant ways. We had, indeed, one very great advantage over our ancestors—anesthetics; but we have that still. It is perfectly ridiculous to go about whimpering and drawing long faces because the scientists have added one more chance of painful and premature death to a world which already bristled with such chances and in which death itself was not a chance at all, but a certainty.

This is the first point to be made: and the first action to be taken is to pull ourselves together. If we are all going to be destroyed by an atomic bomb, let that bomb when it comes find us doing sensible and human things—praying, working, teaching, reading, listening to music, bathing the children, playing tennis, chatting to our friends over a pint and a game of darts—not huddled together like frightened sheep and thinking about bombs. They may break our bodies (a microbe can do that) but they need not dominate our minds. 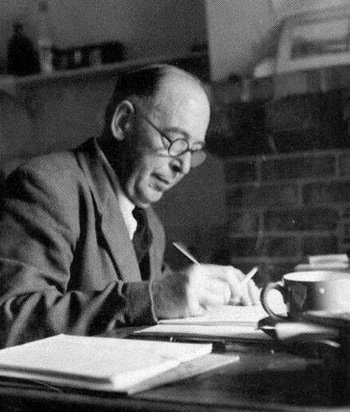 As noted by Aaron Earls in this response, many people seem to be misinterpreting Lewis’s thoughts here. As he suggests, Lewis would not tell us to ignore the coronavirus, to just go on with our lives by “doing sensible and human things” (in fact, that wouldn’t be “sensible”). Experiencing a daily threat of the bomb is not the same situation as experiencing a global pandemic, and our actions need to fit the situation. As the top scientific and public health experts are telling us, it’s key that we adapt our behavior to stay home and socially distance to decrease the spread of the virus to the fullest extent possible.

When I first read Lewis’s essay, I felt strangely comforted. Humans have lived through epic tragedies before –  such as during the days when there was significant threat of the atomic bomb, the great wars, and the plague – and the novel coronavirus falls in that long line of global crisis. This has helped me to connect with ancestors – including my dad who fought in World War II and likely had to deal with a lot of the same feelings as I am now – as well as many more before me. Many did not survive, but this crisis is helping me to connect with a sense of humanity common to all people across ages, races, religions, genders, etc., and that feels really important. If we are learning nothing else from this pandemic, I believe, it is that we are all far more interdependent than we previously realized.

I think Lewis’s main idea comes in his obvious point that we all are certain to die, many of us in rather unpleasant ways. Most have not really seriously entertained that thought or worked through how to deal with it. We have not yet prepared ourselves for suffering.